Marco Ziccardi - Half computer scientist, half software engineer, half sport and mountain addict.

React.js is a web framework for user interfaces in Javascript. React popularity is growing and with its popularity also the number of available tools and their quality. Several applications can be found on Github to be used as a starting point for you own project. Few examples can be found, however, on how to set up your production environment given one of such boilerplates. In this post I’ll show you how to configure a Google Compute Engine VM to run the React.js stack. I will use the React Redux Universal Hot Example as it seemed to me one of the most complete. It involves an API server written in Express and a React.js application. See here for a complete list of tecnologies.

If you haven’t already, create your Compute Engine project. From the web console create a Debian GNU/Linux 7.9 “wheezy” VM of the preferred size in the preferred zone. Remember to allow HTTP and HTTPS traffic by ticking the corresponding options: 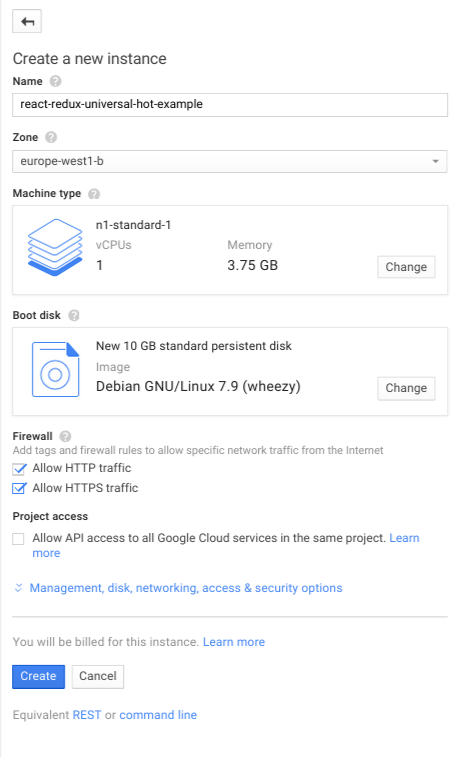 First of all, let’s install git. This is as simple as typing:

To install Node.js you have several options, you can either download linux binaries from here and put them into your path or compile the sources. Let’s try the hard way and compile Node.js from source:

Notice that trying to compile any version more recent than 0.12.7 will fail as it requires a more up-to-date version of g++, not available in Debian “wheezy” official repos. If you need a more recent version I recomment you to download the pre-compiled binaries.

Clone and Build the Example

With Node.js installed we can finally clone and build our example:

Now we could start the example with a simple PORT=8080 npm run start but this will give us very little control on started processes. What happens if Node.js fails? Where are the logs put? Lucky for us, forever comes to the rescue.

forever allows to continuosly run Node.js applicatios and to start, restart, stop them (and much much more). I recommend you to consult forever --help and discover by yourselves what forever can do for you. Firstly, install it by running:

Now our React.js application is up and running on port 8080. You won’t be able to see it from the outside of you VM as port 8080 is closed (unless you opened it). Running Node.js on port 80 is, in general, not a good idea. To avoid doing this we use nginx.

We configure nginx to serve as a reverse proxy server: nginx will listen to connections on port 80 and forward the traffic to our React.js app, running on port 8080. First, install nginx with:

Then create a configuration file for our React.js application:

Now edit that file and put the following configuration in it:

Before starting nginx we need to enable the configuration by putting it in the sites-enabled directory (using a symlink):

And finally we start nginx:

Your React application is up and running charmly in production, visit it at http://<your VM address>. Now you can go on developing some cool stuff!